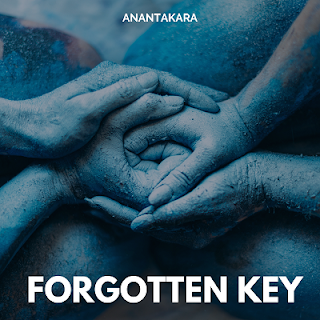 There is nothing quite like being able to listen to the artistic endeavours of a musician who has such a grasp on mood motion and reality, and to that point I am most grateful to be able to bring to you my thoughts on the latest release by Anantakara entitled Forgotten Key.

This is truly a quality album that has such wonderfully smooth tones and crisp but pertinent notes of value. By listening to the opening foray entitled Right Time - Right Place we have a track that hovers and floats around us, and vibrates at a resonance that manifest something so fascinating, that you will never ever wish to leave it environment.

A slight but sensitive back percussive element can be felt within this next track called Behind Below And Above, almost an alternate suggestion on Phil Thornton’s New Age classic called As Above So Below. Here the artist manifests waves of electronic music that drift, ebb and flow, with a crafted keyboard that is the master off all that it surveys; this is an experimental arrangement that is simply idyllic for any seeker of a free musical sanctuary.

At the half way juncture we come across an offering that I adore, and I am sure that Eno himself would salute this track called Ask The Seer, the inspiration I drew from this piece as a musician was immense, moving from new age legends like Deuter to the aforementioned Eno. This is classic ambient music, a hovering intensity, a manifestation of musical genius to create a void in musical time and space and thus, Ask The Seer is born, this is ambience personified, this is without doubt my personal favourite track off the album.

A horse of a totally different colour can be found on this next composition called Unnamed Rituals. At times this is a track that drifts into the realms of Germany’s Al Gromer Khan, it has a wonderful ethereal flow to its back drop of ambience, whilst in the forefront, a minimalistic sense of a setting is so atmospheric and moody, and wrapped up in an environmental dome of musical pleasure.

Forgotten Key is a stunning album and pieces like La Force Du Coeur [That Heart Courage] shows me that the artist is literally touching the helm of composers like David Wright or Isao Tomita with ease, this is an offering that moves forward and back and from side to side, and whilst doing so compensates for every musical nuance along the way, and is without doubt one of the most inventive pieces from the album.

The last track off the album is called Times Are Changing, this is an arrangement that seems to coalesce and swim within itself, and whilst doing so manifest something different from its exit on the other side of the composition, a clever way to leave the album indeed.

Forgotten Key by Anantakara in my view is the artist’s best work so far; he has challenged his audience to step out of those preconceived boundaries of life, and offered up musical solutions and tones, in a sanctuary of musical ambience and artistic brilliance that I truly believe to be some of the most magnificent electronic music I have heard thus far, this year.