Pinned Down by the Rain By Mad Dog Blues 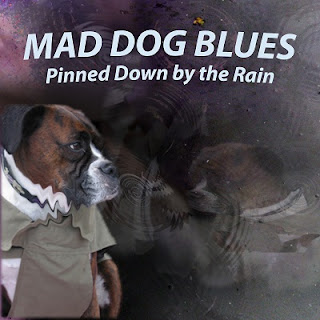 Pinned Down by the Rain

There is no truth in music stronger than the Blues, and this brand new album from Mad Dog Blues called Pinned Down by the Rain makes me want to reach for my Harmonica and join the team which gives us some of the most earthy, real, and downright great blues music to thoroughly enjoy.

This super group of fascinating musicians gifts us a moody opener called Siren recorded at The Muse Performance Center in Lafayette, this album would contain four further tracks from that gig in the guise of Down So Long, a harmonica players delight and very reminiscent of the old style Blues of artists like Robert Johnson, Water In The Well, a track that has a sense of rhythm like a fresh summer sunrise, Pass My Hat, a song so deeply expressive and places on the dining table of music all that is good about the Blues, and the title track Pinned Down By The Rain, a great title, a superb song, and one that contains a sublime atmospheric energy created by a talented band of musicians.

Pinned Down by the Rain is a classy live Blues album created from favourite performances by the band from 2021; it includes segments from various venues that have the good sense to hire live acts, and to be able to hear innovative songs like Hear Me Crying and the longest piece off the release Never Lost Love, just shy of 14 minutes in duration and containing some crafted solo performances within one very full flowing offering.

Pinned Down by the Rain by Mad Dog Blues is a rarity today, true live Blues from the very heart and soul of the planet; played how only Blues can be played, from one heart to yours. The album contains classy performances by, and let’s mention the band:

Mad Dog Friedman on harmonica, Jeff Becker on mandolin, Clark Chanslor on bass, Sean Bennight on guitar, Big Willy Palmer on guitar and Mark Kaczorowski also on guitar, in an album that is raw, real, fun and most certainly shines a beacon for live Blues the whole world over.

Posted by Steve Sheppard at 8:07 AM