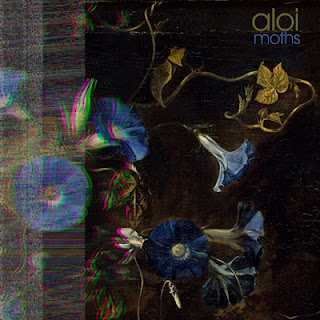 Moths by Giovanni Aloi has to be one of the most fascinating projects I have had the pleasure to write about for ages, the artists reflections on life and special moments can be found deep within the weave of each construct on this album, this is a release of mood, feeling, sensitivity and fragility, and it also happens to be an outstandingly beautiful to album too.

There are 10 tracks on this release that all deserved to be listened to in depth, maybe many times over, each composition is named after a Moth that has been found to be endemic, in what could at various points of time, be called home for the composer.

I found much here to listen too, much to reflect upon, and much ambience can also be sourced from this quite moving opus of sound and tone, moments of emotive genius like Thaumetopoea processionea, a piece that has such a depth of emotion that it floats within its sea of musical tears, and perhaps Ascalapha odorata, a sad creation that flutters towards the light of a thousand stars and simply fades into the darkness of a musical soul, a wonderful performance on piano and strings can be found here.

This combination of the Neo Classical and the electronic is something close to my heart as well, and here on Moths, Giovanni Aloi has something to be very proud of, bathe in the flight path of Daphnis nerii and drift with a performance that is beyond ambient, and with a slight sense of drama and passion too, or float with the concluding composition Lymantria dispar and enjoy the freedom that the presentation offers, with a hint of a minimalistic narrative, building to a steady electronic bed of vibrational wonderment, this is not only a magical example of the wondrous creative mind of Aloi, but a sublime way to end the album.

Moths by Giovanni Aloi is one of the most compelling and moving albums I have listened to for years, each composition id played with such passion, honesty and a depth of feeling, that it is truly impressive, Moths by Giovanni Aloi is musical genius, from the heart of the artist to yours and if there was ever an album that should be in your collection at all costs, then this is it.

Posted by Steve Sheppard at 7:23 AM