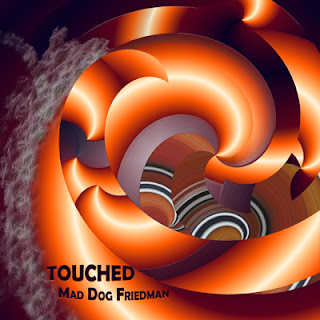 There are many facets to musical styles and instrumentation I love, but there is nothing quite like the magical mystery tour one takes through the realms of a beautiful atmospheric Native American style flute, and it is this we can do now through the medium of Touched, the latest album by Mad Dog Friedman.

This sojourn of sorts starts with a mournful repose and a vast dimension of sound on the opening piece Echoes from Within, one that flows with sublime peace into the following narrative entitled Bruce's Blues, where a moody, but incredibly smooth performance can be found.

I adore the opportunities given up by the master key of the title track, the grand scheme of the entire album can be found here, and what a sublimely deep resonance can be sourced, one that echoes through the halls of the ancients with a blissful serenity of Touch.

Each and every track on this album has been crafted from its own mood and energy, and tracks like There There and Ashed are two fine examples of opuses that have been brought into this world via a vibrational intent, and allowing the flute to be the key element in their creations.

Honouring the third god in the Hindu triumvirate we move to a wonderfully organic presentation entitled Dance of Shiva, a happy and light performance can be found here from the artist, one that drifts into the welcome arms of a haunting reverie entitled Snow, a track that would go onto become one of my personal favourites from the release.

My heart bows to your heart through the track Namaste, a duel performance with echoes of spiritual flute floating back and forth in the distant dimensions of a gentle musical reality.

For me Sacred Scar was one of the top tracks from the album, one that reminded me very much of the work of Nigel Shaw on Dartmoor Roundhouse; a beautifully fluent and mysterious offering can be found here, one that will take you to a place of total stillness.

Angels Are Crying and Heart had so much to offer the listener, the former a delicate offering that hovered around the senses creating calm, the latter a deeper construction that gifted us a truly honourable meditative moment.

The short form cleverness of Flickering was wonderfully artistic, a track born from the moment with ease, while another masterful performance can be found on the resonations of a song of harmonic bliss entitled Triangles.

As we draw to towards the end of the release, I am minded of the quality of pieces that draw such an emotive response, as usually is the way with a solo flute album, and the composition Nothing is a fine example of that, almost imploring at times, but certainly an opportunity to go within the void.

Now and Again is our penultimate offering and another almost haunting reverie can be found here, but one that has an almost dualistic sense to its build and progression, whilst the concluding track entitled Baby Steps reminds me that even at the age of 64, it’s never too late to take up the challenge of learning to play the flute, I just hope I have enough time left to even get near the last sublime ending opus.

Touched by Mad Dog Friedman has to be one of the most original and organic albums I have heard for many months, birthed from the heart, mind and soul, here is a solo Native American style flute release that will delight fans of the genre, an album, that if you allow it do so, will take you away to a place of tranquillity and calm, to breathe again.

Posted by Steve Sheppard at 7:45 AM