Waves Of Sleep By Andy Rogers 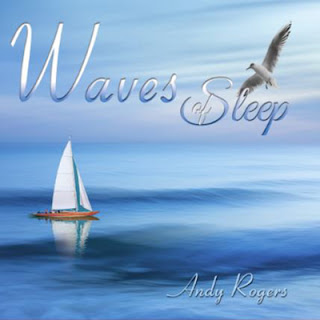 Andy Rogers in music mode has been progressing nicely for some years now, but it could be that on Waves Of Sleep the artist has probably produced his best work thus far, from first note to last, here is an album designed to bring comfort, calm and a restful ambience to the listener, and it works brilliantly.

The opening piece Waves of Sleep Part 1 ushers the eager and weary listener into a soothing musical narrative in such a gentle and tranquil way, this long form opus also contains the natural sounds of seagulls and caressing waves within the composition as well.

Rogers has been likened to artists like Chuck Wild of Liquid Mind, Stephen Rhodes, Mike Rowland and David Sun; whilst I can understand the comparisons, I believe that Andy has now moved past even that point, and has transcended his peers with some of the most healing and calming music around in this current era, for example one may visit tracks like The Healing Bowls for a blissful meditative arrangement, or perhaps his big hit single With the Dawn Comes Hope (Piano version), originally written in the middle of the pandemic, a song that gave us all the hope we needed.

Whatever Andy Rogers creates, it has one thing always contained within, honesty. We can touch the hem of greatness and feel the love and the heart of his musical soul, through offerings like The Moon Rising, a powerful yet emotive song indeed, and then try the warm and caring composition entitled As Day Turns to Night, a track that salutes the day with a smile, and allows one to close their eyes to look forward to a new day to enjoy.

The album concludes with another long form creation that is the sister of the opening track, Waves of Sleep Part 2, and may I add this was a very clever move, as the album opens, he eases the listener into a sanctuary of calm, now at the end, they can simply drift off onto an ocean of hope, serenity and peace, and that cannot be a bad thing at all, can it?

Waves Of Sleep by Andy Rogers does exactly what it says on the can, Roger’s music has now crossed the threshold of being just very good, to being extremely crafted moments of tender and soothing brilliance. Waves of Sleep has to be an album in with a chance of an award next year, and in my view easily the best work from an artist, one who truly cares about each note played performed and produced, and thus is utterly recommended as the album you most need, if you wish bring a realm of tranquillity into your world.

Posted by Steve Sheppard at 4:28 AM