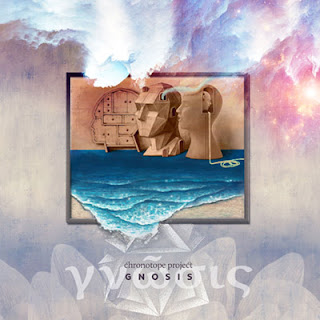 It is always such a pleasure to review music in the genre in which I create, as an artist it gives me great inspiration, as a writer it allows me to drift free on an oasis of bliss, allowing me to manifest my interpretations on what I hear, it’s a win, win situation, and on the brand new Chronotope Project album Gnosis, we have all that rolled up into one big lovely ball of ambient electronic heaven.

Gnosis is a wonderful example of really good electronic ambience, manifested by Jeffrey Ericson Allen in his guise as Chronotope Project, and here the Oregon based composer and performer, has hit a home run with this stunning new release. The opening track sets the scene perfectly for us and is called Higgs Field, Cauldron of Being; it is a melting pot of electronic mastery, a track that literally brings the whole project into life, through swirling synths and magical keyboards.

Like a vast range of words, most come from the Greek, as does Gnosis, a feminine noun which means knowledge or awareness, and here the artist explores this spiritual narrative of that exploration beautifully, one of my favourite tracks from the album is a sublime example of this knowledge seeking genius, and entitled Lethe, the River of Forgetfulness, a steady onward bass, a delicious keyboard segment that flows like a river, and a synth that just hovers like a summer haze in late July, wonderful.

Eidos, Realm of the Forms has a depth and crispness to the composition that is truly addictive, the repeating motif on keyboards gives us the motion to move ever onward and explore this realm, while the artists synths manifest something almost hypnotic, as through the tones of the performance and the resonance of the creation, we can allow our minds to visualise all manner of shapes and forms, and then watch them dissipate

The shortest track off the album at just over 6 minutes long signifies our half way point within the offering, and is called The Still Small Voice. It is one of the most melodic and emotive electronic compositions I have heard since Stellar Nursery by Kevin Kendle. There have been many wonderful pieces I have heard of in many decades, but this track literally cries on your shoulder, the performance is akin to Vangelis when he manifested the world renowned Memories Of Green, this is electronic ambience at its very best.

The penultimate piece off the release is called Entelechy, Emergent Order; here is a composition that has a multi-dimensional essence to its construction. Layer upon layer of ambience is birthed here, a sense of rhythm too, and overall a wonderful floating reality of a slow waking, and an awareness about to unfurl. There is also a crafted depth to this arrangement, one that seems to build and progress with consummate ease, and created with a great deal of care and attention to the smallest of musical details too.

We now arrive at the last portal of the album, a track called Myth of the Cave. The beginning is cleverly held back, whilst the energy of expectation builds, close your eyes, listen, and you could easily be entering the cave to perhaps confront your greatest fears. The tones and effects used here draw a wondrous almost twilight zone moment for us to enjoy, in short if you ever wish for an example of really good long form electronic ambient music to be laid before you, then I would point you in the direction of this very track.

Gnosis by Chronotope Project is without doubt the best electronic ambient music album I have heard this year, maybe even longer than that, its crafted construction, performances, presentation and production, must surely rank this release as probably one of the best ambient electronic albums of the last decade, I truly believe it to be that good, and thus if you’re a fan of this style of music, and wish your imagination to be utterly captured, then Gnosis by Chronotope Project is an absolute must for your musical wish list.

Posted by Steve Sheppard at 5:21 AM