Eleven After Midnight By Holland Phillips 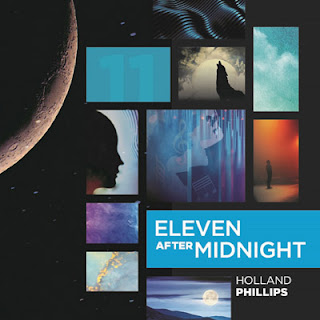 Holland Phillips is one of those artists that sit’s high on my “A” list of musicians that can simply do no wrong in my book; the journey I undertake willingly is to sojourn through his tenth release to date called Eleven After Midnight. This voyage sees Phillips skills as a composer highlighted to such a level that it is an utterly transcendent voyage we now traverse.

From the light and sparkling refrains of Lights Out we are gifted something quite moving and calming, the melodic structures continue on one of my personal favourite tracks entitled All That We Are, Phillips is a blissful arranger of quality instrumental music, and here on this piece we see an almost film score narrative in play.

On Stranger Dreams we can imagine that we are now in the deeper and darker realms of Phillips creative dome of night time, the electronic energies here are wonderfully crafted, and the pace and tempo gives us a veritable soundtrack to our inner dream walking.

There is an almost science fiction essence in the track Landing On Mars, and within the dimensions of the title track itself, Eleven After Midnight, we are presented with one of the most moving compositions off the album, certainly one of the deepest arrangements thus far created by the artist.

There can be no doubt that Holland Phillips is at the top of his game in the genre of contemporary instrumental music, and this album will cement that legacy, and as Phillips says, his most creative time is after midnight and through the small wee hours, it shows on this most outstanding album. The penultimate track is a fine example of this crafted genius and called Pieces of You, a track that literally screams musical anthem and yes my favourite offering off the album, with the concluding song At Night's End, we can see once again the sun light creep in through the gaps in the curtain cladded windows, and a sweet calming arrangement of very classy keyboards draws this wonderful experience to an end.

Eleven After Midnight by Holland Phillips is an album of a different direction, a collection of compositions that have been created when the artist’s musical force has been at it strongest. It shows with ease and each and every piece has a fluency and emotive resonance that is just simply undeniable and utterly encapsulating. Eleven After Midnight by Holland Phillips is a real example of really good contemporary instrumental music, some of the best I have heard this year, and is a release that you would really be advised to add to your ever growing collections as soon as possible, it is that good.

Posted by Steve Sheppard at 3:40 AM