The Winding Way By Peter Sterling 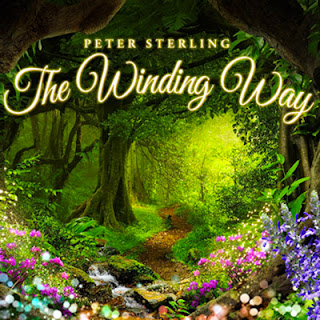 There is nothing quite like the voyage of self-discovery, something a lot of us have had to do, and still do during this pandemic. What came out of it for me was a positive reflection on a multitude of fronts, for Peter Sterling he began to simply go with life’s flow, and enjoy each segment as it came, The Winding Way is part of that sojourn for the artist.

The opening piece to this new album says it all, a meandering roaming composition, Beauty Abounds is exactly that, a song that whistles to itself down the misty foot paths of life’s rich tapestry.

The Winding Way is an 11 track album that takes you into a heavenly vibe and leaves you there to simply float safely, a fine example of that is the ethereal and angelic opus of Calling Angels, a soft and calming composition that manifests a realm of simple, but utter tranquillity.

There are many delights along this winding way; the light-hearted reverie of Rose Petal Tea, with an added string section makes this arrangement for me very special, and reflective of hazy summer days of the past, or The Noble Night, a delicate almost pristine offering with an added flute that drifts across the borderlands of time, with an almost regal presence.

The multi-instrumental nature of this album is a pleasure to take in and allow control over the senses too, this has to be one of the calmest and deeply serene albums I have heard this year. Listen to Hope for Tomorrow or the concluding track A Love that Lasts to back up my aforementioned statement.

I must give a quick shout out also to G-Dov Gertzweig who plays the violin, Richard Hardy the silver and bamboo flutes and finally Hans Christian on Cello; they all contributed to the album to bring about this wonderful sense of harmony.

The Winding Way by Peter Sterling in my view is the artist’s best work thus far, it is easily his most ambient construct, but also Sterling must be proud of this musical contemplation, it does indeed reflect the serene tranquillity that some of us have found through this turbulent time, and as such The Winding Way is a real must for those who seek to just live in the now, and enjoy the simplicity of each and every moment, a thoroughly recommended album indeed.

Posted by Steve Sheppard at 1:30 AM