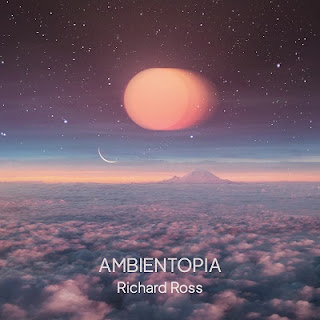 My love for ambient music is well known across the industry, inspired by the works of Tomita in the 70’s, bathed in the soundscapes of Eno from then onwards, so much so, even I now record electronic ambient music to pacify my artistic muse. Here with this brand new offering by Richard Ross, we see the artist, who is one of the most adaptable musicians around today, take a gentle and careful step through the doors of the ambient music library, and bring us ever eager listeners something truly remarkable in the genre.

Ross is a master of all trades with a skill set to be proud of, everything he touches as a producer is simply sublime. Ambientopia is his land, his dimension of electronic wizardry that we can now float within, and no better place to start can be found than with the opening track Liquid Spheres, a composition that caresses your senses, and covers with its warm embrace, your entire being.

Alpha Particles has that little touch of Vangelis within its musical clothing, the experience, especially on this track wearing headphones, is truly something to enjoy. There is a mood of movement and flow here that is delightful, and listening to this track is like listening to the very birth of life itself, from the very primordial soup of the universe and onwards.

As we move to Beta Particles we find a more relaxed sense of growth, one that seems to be evolving through a gentle persuasion of nature, the New Age qualities also manifest within this offering, and create a wonderfully floaty composition that can become quite addictive the more you listen.

The synths and electronics of Ross are so magnificent, that when we have the honour of embracing the all mysterious Theta Particles, we realise we have been gifted a vast open portal of music that needs to be investigated by our imagination, there is also a decided galactically crafted feel to this offering, that reminds me in parts of some of the more ambient spaces soundscapes created by UK electronic supremo Kevin Kendle.

Mnemonic Fractals is a far more curious track to behold, the chimes and almost hypnotic synth patterns guide us through the curtains of a really in-depth composition, and one that has a marvellous reality of a seamless chaotic energy that resides within its inner dimensions, yet within the performance by Ross, it is so well created and manifested that this could also become a sanctuary of sound for the listener to explore many times over.

Our penultimate offering is entitled Inverse Universe; here we have a perceived sense of a dualistic mood that is truly compelling. I have long believed, and still do, of a multiverse with multiple fractal dimensions that ride on into infinity, and for me I believe I have now found the best piece of music that supports that view. Ross gives us a wonderfully uplifting energy here that comforts and raises our hopes that there is far more to life that which we can perceive, a brilliantly clever arrangement indeed.

Now for our last piece entitled Monadic Plane, my studies in both Reiki and Chakra’s would come into play here, but I would like you to research this for yourself, and do so whilst listening to this track and of course the entire album, you will find it fascinating. The manifestation here is otherworldly indeed, and I would think that this is a track that would most certainly aid any meditational practice too.

Ambientopia by Richard Ross has to be the best ambient electronic album I had had the pleasure to listen to this year with ease, it is an exceptional body of work that for me will become a regular go to place, this work has multiple uses, an album that helps you relax and just be, to a release that aids creativity by manifesting a reality within music to allow the creation of artistic projects, and possible even more, which overall makes Ambientopia by Richard Ross a must have album at any cost.

Posted by Steve Sheppard at 3:10 AM