A Quiet Path By Lynn Tredeau 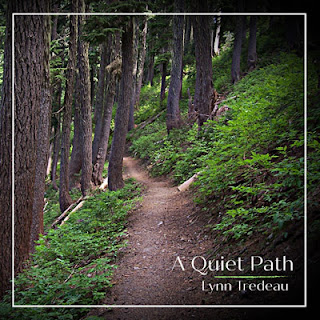 Lynn Tredeau is a very special talent; she is a quiet composer of heart felt and emotive compositions, ones that flow from this great reservoir of emotions to this ever abundant solo piano genre and its ever eager fans. The artist has now released her seventh album, and in my view it is one of the most outstanding works she has given us as of yet.

A Quiet Path is an album that is similar to my own view on life; we live our lives in a sequence of moments, each to be taken on their own merit, and to be enjoyed by being present and in the moment, and with each personal breath. The first track is a reflective but simple offering entitled Kites & Balloons, just listen and allow your mind to visualise the movement through the air of such things, and you will have it, beautifully simplistic, but so artfully played.

Dappled Shade does exactly what it says on the can, remember sitting by a river or a lake, just watching the day go by, the delight of watching the glistening fractal impressions as the sun kissed the water, and then the sunlight that drifts across the edge of the clouds that ease by. Dappled Shade is a perfection depiction on piano about those moments for me.

One that had me in rapture was Meadowlark, we get many of them here, and to just stand and simply watch them is purely a blissful, in the moment segment indeed. The performance is easy and light; one can imagine with ease the gentleness of flight and the happiness of freedom, through Tredeau’s composition.

We now move to a piece called Many Faces of Cassiopeia, this for me was one of the most emotional tracks off the album, I used to gaze up at this wonderful constellation as a child, one filled with so much wonder, and now as a much older man, I still do the same. Tredeau’s performance here brings a lump to your throat and a tear of wonderment to the eye, it is that good.

As we approach the half way juncture we come across a blissful composition that will literally transport you to another location entirely, and called Moving Mountains. This is one very clever piece that flows like the ever undulating hillsides, and rises across the ranges like the mountains themselves with such consulate ease, if this isn’t a piece that would raise your spirits I don’t know what is.

The nocturnal senses are now stimulated with this next offering entitled Hush of Night. This is one of those tracks that could possibly have been composed in the small hours of a dark winter morning, when sleep wasn’t an option that would come. This is such a meaningful arrangement that it truly moves me, I feel I have been where this music has taken me, to a place of solitude in tone and composition in the blackness of the night.

Lynn Tredeau is an artist who literally pours her heart out onto the piano, I have said so for many years, now and through the piece Moon Gazing we can feel that within its structures and arrangements. There is a wonderful elevation of intensity here as if the moon is rising while we watch, but also for me this is a very personal song that we probably have all been under the spell of at one time or another.

The gentle refrains from this quite idyllic track is truly appreciated, as we listen intently now to Rest a Moment. This is probably the most meditative segment off the album as the artists performance and her playing style, one that is beautifully measured and gives us not only something enjoyable musically, but a moment to breath and just simply be as well.

I had to smile when I listened to this track entitled Sunday on the Island. I adore music like this that totally sums up my life and a specific moment; I was only lying next to Chrissie last week, as we opened the curtains of another stunning Sunday morning, and we breathed in the bliss of a new day, a beautiful blue sky, and light fluffy clouds, just eased on by. The warmth with which this composition has been put together, is one of the finest examples of an appreciation of a simple moment as I have ever heard, and yes, I do live on an Island.

Our penultimate offering is called Saudade, this has to be the most emotional track off the album, the piece has such a longing, such an emotive refrain of a need to feel again, perhaps the love of something or someone, that has been lost for good, and through a heartfelt exploration of those feelings, Tredeau helps us deal with any grief in our lives through the one true healer in the world, music.

The last track off this quite moving and artistic album is entitled Aeonian, it is the perfect way to end this collection of utterly transcendent offerings, a moment of musical magic that depicts the immeasurable and almost eternal passage of time, one that seems to last for eternity. This track was also cleverly placed, when one considers the juxtaposition to that of the previous offering.

A Quiet Path by Lynn Tredeau is in my view the artist’s best work to date, and I know that can be somewhat of a clichéd comment, but I truly mean it. She has given us the best insight through to who she is as a person, she has worn her musical heart on her sleeve, and this utter honesty and truthfulness through music, has revealed possibly the best album she has gifted to the world with ease thus far, now this is what excellent solo piano is all about.

Posted by Steve Sheppard at 4:10 AM