Upon the Corner of the Moon By Laurence Furr 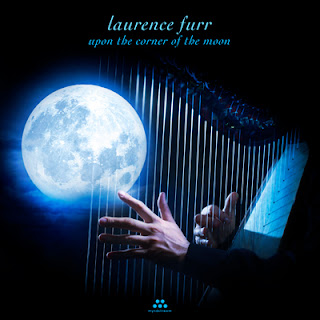 Upon the Corner of the Moon

There is a power behind music that is so meaningful, so tender and focused, it can be created by an artist to do so much good, to calm the minds and hearts, and to bring tranquillity to the weary body, these observations could easily be said about the musical performances by Harpist Laurence Furr, whose Harp is an instrument of peace and serenity, and many who have listened to his mesmeric works have felt a healing energy flow from his arrangements.

We once again travel with Laurence on a new journey, this sojourn is called Upon the Corner of the Moon, it is some of the most blissful acoustic music your ever likely to hear. The title track is a dimensional portal to a whole world of calm; the performance is so fluent and settles the listener down with ease in seconds.

The beauty of this next piece is self-evident, from the very first touch on the Harp we are taken to a place of great serenity, a slow upward progression is taken to a lush and vast vantage point, where one can sit and just be; Furr’s presentation here is both melodic and sun kissed, on the track Jacob's Stairway.

Following on the back of his massive hit album Deep Peace, Furr has continued that energy and manifested a further layer of calm within the weave of this new release, and on Where Angels Tread, we have a light but more rhythmic composition that literally floats all around us as we listen.

The Weight of Beauty is our next musical way station, and another moment to float in the arms of the angelic realms of serenity; this song is a fine example of ambience personified and quietude exemplified, listen to the gentle almost pristine melody within this track, it is so very pretty that one could with ease, imagine this being music from a magical jewellery box.

As we reach Garner Fields, there is a slightly deeper energy to be found, a slight minor flavour is added to this recipe of attractiveness, a piece that reminds me of an old style new age track, perhaps performed by an artist like Patricia Spero back in the lazy hazy days of the early part of this century.

A more rhythmic approach is taken here on Genoveva's Dance; one could easily feel the movement and sway within this composition, combined here was a clever energy of happiness and reflection; mixed all together in a truly radiant opus of sound.

As we step into the second half of the album we come across one of my personal favourites from the release called The Turquoise Door, apart from being one of my favourite colours, we have a piece here that suggests a doorway to an inner dimension of tranquillity, and Furr’s performance is the mechanism with which to get there, and then enjoy it’s contentment, a very meditative piece indeed.

About 10 years ago I spent some time in the Midwest, whilst there I spotted the title to this song Fireflies, sadly I’ve never seen them again since, such delicacy and such beauty all rolled into one, and that is exactly what you get from Laurence Furr’s performance on this rich and colourful composition.

The title of this song gives us a Celtic hint as we roll down the footpath to McDermott's Pub, a jolly piece indeed, one where a collective energy of happiness can be found, and perhaps a visual image of rolling green hills and blue seas from the window of the pub too.

This next offering is entitled Angels Landing, it is so pristine, so elegant, this could have easily been created by the wings of a butterfly, it is such a soft and warming arrangement, one could easily lie in the arms of an angel and simply drift off to a land of preverbal perfection and harmony; there is something about this piece that feels almost transcendent.

The deeper waters of this album have been found and as we glide on this rippling oasis of musical charm we come across a piece, so reflective and deeply moving, and called She Handed Me Her Harp. Music is such a great healer and this is one of those compositions that may well release the emotions and enable the listener to simply let go.

The shortest track off the album is also our penultimate offering called Green Fields of Ireland, now here is a piece with a Celtic motif and one can simply now enjoy the charm of a land, where green meadows and hillsides seem to roll on forever.

Our final gift from the artist is called Matthew's Heart, this could well be a dedicational piece and if so what a charming way to leave the album, with a track that offers up such positivity and intent, played with a heart full of love and respect.

Upon the Corner of the Moon by Laurence Furr is one of those albums you could leave on repeat for hours, and in doing so, manifest some of the calmest energy in a location as you would ever wish to find. Here the artist has brought into being one of the most ambient and certainly most calming releases of the year thus far. Laurence Furr and Upon the Corner of the Moon is a release that when purchased, will bring many hours of calmness, stillness and composure, to any household that has the good sense to do so.

Posted by Steve Sheppard at 8:42 AM