People Passing Through By The Song Gardeners 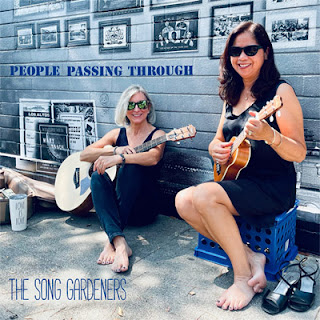 The event I hoped for one day has now come to pass, and I’m listening to and writing a review of a Song Gardeners album, for a year I have been blessed with music from both Corrie Dunn and Mary Gospe and we mustn’t of course forget David Scheibner, now producer, and those ever so delicious singles from them have dominated the charts for months, now they all appear on one magnificent album called, People Passing Through.

The Song Gardeners are a rarity, a new age band with a message; some may mention other bands like 2002, but they, as was once said in the Wizard of Oz, are a horse of a different colour, and certainly much different in style. This rich vein of form has revealed numerous chart hits for the band, like the quite beautiful Harmony of Contrast, a song that highlights the unique quality of beauty within each of us.

Seven hits lay within the sheets of this album and a new one too, but more of that later, one of my favourites happens to be next and called Love Is the Magic of Change, a song that contains a reminder that under the ever watchful eyes of the universe, we are one and we always will be, the song itself is bathed with an almost jazzy chilled out texture. The sultry and sensitive vocals come from Corrie Dunn, while a wonderfully fluent bass line comes from Chris Day.

Gospe is back for this next offering entitled Altered State, this soulful composition has a simply lush tapestry of tone and harmony to it, an 80’s chilled groove floats within the musical narrative. A song about the blissful sanctuaries of meditation, a place I am all too well aware of and go to each night.

Saluting the half way marker is a song that is sublime, and in my view my personal favourite off the entire album, and called Love Flows. The chord changes and the use of minor and major structures create a superb reflective song, the style is akin to a very chilled mantra, but there are some really clever nuances within this song that makes it undeniable, examples are as such, the delicate flute of Gospe, the creative piano of Dunn, and the undeniable brilliance of David Scheibner on guitar; I personally found the energies of this song quite healing and deeply peaceful.

Reveal is our next song, it is an anthem of empowerment for women of the world over, here David Scheibner’s more acoustic guitar segments add an extra dimension to this most powerful of compositions, the song has a depth of intensity that should not be ignored, it is a call for us all to stop oppression, push forward gender harmony and as the song says:

“Empower the people with freedom

To rise above life’s adversities

Empower the people with courage

To tear down the walls of indignity”

So we now find ourselves at the most important stage of the album, the title track, and of course it is called People Passing Through, it features the vocal talents of Dunn with Gospe on backing vocals. This is probably the most inventive song on the album, there is a delicious 70’s feel mixed with an almost up to date urban groove here, and all with a message that is so important, living in the moment, after all it is all we will ever have.

The penultimate track is much appreciated and called Sabbe Satta Sukhi Hontu, this is a Pali Buddhist chant if I remember correctly, and translated means, may all things be well, or happy. This chant can be sung or even spoken, it brings great peace, cultivates feelings of love and compassion, and as both Chrissie and I are Buddhists, this creation is truly appreciated. The major and minor energies of this track are amazing; this has to be one of the most emotive yet uplifting arrangements of this I have heard, I bow with utter appreciation to Dunn for her stunning vocals on this track.

Well we have arrived at the last song off the album, and it is the much loved Warrior of Light, what a song this is for these times of utter chaos; lies and deception, 2020 brought some of the most ugly pictures of humanity to our screens, but as the song says we need to be warriors of light, and in doing so we must not get caught up in the tumult of anger and vitriol of those who wish to control us through fear and deception; a powerful song indeed to finish with and one that ends an album that we have all been waiting for with eager anticipation for some time.

People Passing Through by The Song Gardeners is everything it should be, a collection of their best works thus far and all in one wonderful place, each of the songs on this album has a depth, intent and passion all of their own and each has been created by the artists directly from the heart to yours, bathed with unconditional love and a positive intent. People Passing Through by The Song Gardeners is a ground breaking release, and one that the ever serious collectors of sublime songs should have in their collections at all costs, and filed under music that makes you think and reflect.

Posted by Steve Sheppard at 2:11 AM