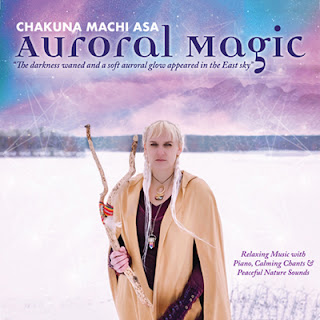 A new album arrived on my desktop to review, and one so interesting that it took me back in time in many ways, musically and spiritually. Auroral Magic by Chakuna Machi Asa touches base with a simplicity of sound and tone, but in doing so creates a healing energy that flows through the vibrations of the album, and the gentleness of the tracks creates an idyllic surrounding you will never wish to leave.

A prime example of the end of that last statement of mine, is the first track off the album entitled Blood of our Ghost, listening to the artist imploring refrains and tender vocals was a sublime scene setter, the natural sounds simply beautiful, but a relevant focus for all that is truly real, one could with ease see the singer manifesting a moment of sublime oneness by a mountain stream with her guitar.

If we glance to our left we can see a new energy building and this composition is called Elven Magic, this is a truly powerful opus that has a blissful addictive quality to its construction, in an almost Lord of the Rings style. We can through the music feel the essences of a ceremony beginning to build perhaps.

On Planet Xeron we have a completely different style of composition, one that mixes an ambient nature with a sultry chilled rhythm. This reminds me of a lucid dream I had once, a mixture of cultures were there in a circle of peace and positivity; a smooth flowing beat with a delightful soothing vocal can be found in this mesmeric offering.

This must be one of the most unique albums I have heard for many a year and once again change is offered through this next song entitled Dancing Reflections. The water sounds here gives us a clue that there is a duality within this musical narrative that is being discussed, the shimmering qualities of light on the ripples of a lake perhaps, and the pianos repetitive but scaled performance bring us a clever dance between the sun and the water, utterly transcendent and transfixing

From one element to another now as we reach the track The Wind, this has to be one of my favourite pieces off the album, a meditative offering indeed, and I could have used this exact piece whilst I was meditating by the pool only yesterday, I gazed at the way the wind played with the branches of the palm trees, and closed my eyes in meditation as the sound of the wind drifted through its proud green leaves, this specific track would have been perfect for that occasion, a piece deeply bathed in the stillness of the moment.

I can always tell when I have been literally hooked by an album, I had forgotten to save my work thus far, and we are over half way through the release, always a good sign for me, so with that done, let’s continue to move forward and into the piece called Time Womb. This is another clever offering; there is a throbbing beat here that perhaps given the subject matter one could expect, then an added layer of keyboards and electronic wizardry, this combination craft-fully may well be exploring all facets of life and its impermanence.

On Blue Moon we have a different energy here completely, the keyboards create a tentative mood, there is an energy of a possible creation that seems yet to have formed within this realm, but is expected to do so, the use of pause here is sublime, creating further anticipation within the composition, that makes it for me one of the most artistic offerings from the release.

Interestingly enough I am host of a space music show on One World Music Radio, and mostly the music that flows there is of an electronic nature, but I am going to include this one on my next show, as Space Shift has a beautiful compositional structure that manifests for us a vast realm and spacious dimension with which we can wonder through, perhaps we are even exploring ourselves within the role of the grand universe itself, a splendid combination of vocalisations, keyboards, synths, and a galactic awareness so very powerful, a truly special track indeed.

The longest creation from the album is up next and called Our Escape, A delicate onward movement of keyboards and chants can be found here, and reminded me in part of some of the Reiki chanting I use to once do. The simplicity of the keyboards here are perhaps showing us the way from suffering and into unconditional love. This is one of those songs that there is so much contained within it, that I would advise multiple listens, each one will be fresh, but still utterly enjoyable.

The gentle flow that is The Whale Song is up next and is without doubt the most melodic offering from the album. Here we have a track that tells us that the whale is completely at home within its own environment, and thus the composition manifests a harmonic resonance that is both deep and knowledgeable to reflect that. Chakuna Machi Asa has manifested something here that is so inspiring and fluent, a pieced filled with the wisdom of, and gratitude that, Whale energy can teach us, simply beautiful with every note played.

Our penultimate track is a dedication written for the artist’s stepfather called John. The natural sounds and gentle keyboards bring us an idyllic location to just sit, be and reflect; regardless, it is a beautiful composition with which to honour him.

Our final gateway to this musical reality is the title header and of course called Auroral Magic, this song will have a multitude of possible meanings for all those who listen to it, each of us has our own magic we may choose to bring forward, it is an invitation to bathe in the pool of hope whilst listening to it, and one must say the perfect way to leave a wonderfully flowing and heart felt album.

Auroral Magic by Chakuna Machi Asa has to be one of the best New Age music albums of the year so far, it is so creative, so wide in its musical narration, and vastly abundant in its rich tapestries of colour and tone. Auroral Magic by Chakuna Machi Asa is an album that has been crafted from the fires of artistic brilliance, and forged in the flames of pure class, and without doubt should be on everyone’s must have list.

Posted by Steve Sheppard at 4:26 AM