Now The Silence By Juan Sanchez 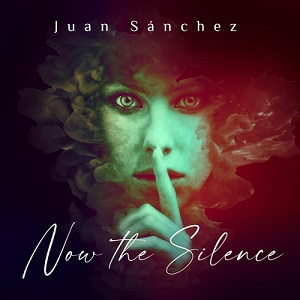 There are a small number of musicians, that when they play and perform, you sit there utterly mesmerized, now this is my first time listening to the work of Juan Sanchez, but after three listens to Now The Silence, I can see with ease he would fit into that masterful category, as a storyteller of musical class with great simplicity.

This journey of piano with added instrumentation starts with one of the most emotive compositions your likely to hear, and entitled Very Young Old Man. This title moves me, as it is how I see myself, I may be in my early sixties, but the man in the mirror is still the vibrant 30 year old that once was, this is the soundtrack to my mental perambulations of those far flung days of youth.

The gentleness on keyboards on Luz de Luna is simply divine, the fluency here is so crafted, and the added inclusion of strings manifests something as gentle as an early summer breeze, one that drifts across the mountains on the first glance of a moonlit evening, a track of outstanding natural beauty indeed.

Now The Silence, the title track of course is our next offering, for me this piece really caught my attention, and I keep coming back to its tones time after time. Here is a beautifully performed opus on piano and one that excels in its energy of a mysterious nature, a track that creates a meditative ambience, but at the same time a haunting refrain also.

We now move to a track that seemed familiar to me and entitled Alma, for me the strings once again enhanced the overall composition, and did so dramatically manifesting a piece that for me, would be film score standard; the repeating motif on piano drew an aged narrative, one also touched with the element of reflection.

We have now arrived at the half way juncture, and as we do so we come across a light and easy offering called Woolgathering. Sanchez’s memory palace of a performance once more crafts images of a nature theme, one so soothing to listen too, and so easy to draw images from.

Our first tentative footfall into the second half of the album comes courtesy of this piece entitled Tolworth. I know a location named as such in England, this is as lush as that locality. The most crafted element of this track is the utterly stunning symbiosis of piano and ethereal vocals.

It is interesting that this next composition is called Idyllic, as it is how I would describe the entire album in one word. The track however, is a moving opus of strings and piano, melded together with love and a heartfelt intention, this is a piece that will literally caress your emotions, and allow your sorrows to fly free.

We are in the deeper waters of this release now and as we glide on our musical boat within these musical currents, we come across one of the darker arrangements from the release entitled Remembrance. It is the musical equivalent of sitting alone on a hill in nature, and watching the late autumn clouds drift past, whilst remembering the days good and sad of your life, a deeply moving offering indeed.

Our penultimate track is also our shortest piece off the album and called Siempre, which I believe translated to English means, always. This is a simple but very effective dance of piano and strings, one that is so effective at drawing a profound sense of kindness and good intent from the musical narrative.

So we arrive at the very last doorway to this wonderfully fluent musical sojourn and it is called Blue Nights, which at just shy of 6 minutes, making this the longest track off the album.  Blue Nights is one of those tracks that as a musician you hope and pray for, a perfect ending arrangement to an album, and perhaps even one that sums up all the pieces that have preceded it, the good news is that it succeeds with ease, and allows us to leave the album with a sense of peace, tranquillity and calmness.

Now The Silence by Juan Sanchez has to be one of the most soothing musical journeys I have been on for quite some time, each and every track on the album has been crafted to such a pristine quality, and produced with such a deep care and attention to detail. Now The Silence by Juan Sanchez is that album you have been waiting for to accompany those moments of meditative bliss with ease.

Posted by Steve Sheppard at 5:46 AM