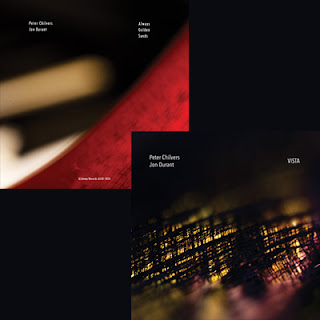 I begin on an unusual combination today, as for the first time I review and ep and an album at the same time by the outstanding ambient duo, Peter Chilvers and Jon Durant. We shall take a look at the three track EP first entitled Always Golden Sands.

From this quite soothing collection I found that I had defaulted to the first track on now three occasions, autumn is always a very special time of the year for me, and music created about it doubly so. Always Autumn the arrangement is so redolent of late October, and the ambient tones of the artists, caress the gentle winds that blow the golden leaves from the tress.

The middle piece off the EP is entitled Shifting Sands and has a wonderful sense of movement about its construction that I totally adored. At times I could even draw comparisons to the late but great Michael Allison (Darshan Ambient), the synths and keyboards floated with the cadence of the day and the ever moving nature of sand, time and tide combined flawlessly.

The third and final track from the EP is called Golden; this lush and colourful musical narrative is simply idyllic, this is ambient music at its most descriptive, and it is a performance like this from Chilvers and Durant, which also inspire me as a musician too, one who also plays both keyboards and ambient guitar. The serene energy and calmness of compositional arrangement is blissful, and at times redolent of another late but great artist in Harold Budd.

So we move now from the realms of the EP Always Golden Sands and into the welcoming arms of the album entitled Vista, this journey starts with a very familiar word, one that has now become part of our everyday lives, Quarantine. The most obvious comparison from the previous EP is that this sojourn starts with a really dark and tentative offering, one all too familiar to us. Quarantine is wonderfully nervous, like taking steps in a completely dark room and hoping to avoid any dangers, the performance here is utterly mysterious and dark, and similar in depth to Eno’s work on his early ambient albums like On Land.

We move onto a truly charming offering from the duo entitled Hamlet, the keyboards here offer up a warming narrative, but one that’s touched with an element of care and a sense of respect. This is the shortest track off the album at four and a half minutes long, and is one that manifests a wonderfully slow pathway of ambient genius as well, one that has a charming European motif to its narrative as well.

Embers is our next port of call, the guitar of Durant here is sublime at creating a mood so vast, wide and mysterious, the nature of the keyboards and this incredible symbiotic partnership with Chilvers manifests a realm of music that is its own ambient dimensional construct, Embers is indeed a piece to get utterly lost in.

This next piece is divine and also happens to be our penultimate offering, entitled Age of Steam. I grew up as a child of steam trains, but in its latter days, this could easily be a soundtrack to those perambulations of yesteryear. The clever and creative combinations of musical mastery here are bathed in a steady and onward movement, and the crisp and memorable performances by both Chilvers and Durant, offer up a beautiful textured tapestry of sound to bathe within.

For our last piece we go long form, and this classy yet huge composition, one at well over 20 minutes long is upon us and called Sunset. The slow and tentative sojourn here is so redolent of the subject matter. This expansive opus is an ambient music fans delight; the essence of the piece and its construction allows us as listeners an age to wander freely within the music, giving us all moments of time to enjoy all the nuances of the track. The keyboards and the Cloud guitars of Durant give us a wonderful conclusion to the album, in a track to literally just float away to.

Peter Chilvers and Jon Durant have manifested two collections of simply idyllic music for us to enjoy on the EP Always Golden Sands and the album Vista. The expansive qualities and textures of quite breath taking music create a clever yet beautiful juxtaposition between the two recordings, and we can see how one spawned, if you will, the other.  For me this is exactly what I adore in ambient music, and as listeners we have the perfect treat of both light and shadow on both albums, and a musical myriad of ambient dimensions to swim within for an eternity, ambient music really doesn’t get any better than this.

Posted by Steve Sheppard at 9:18 AM