The Christmas Piano By Holly Jones 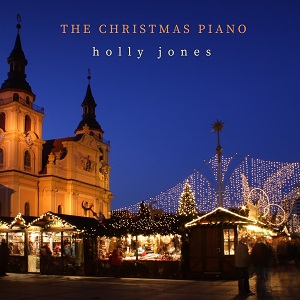 Due to the vast amount of Christmas and holiday albums released every year, I have developed a technique, and a view point of where to look from with regard to any reviews I undertake for an artist, I look for originality of performance, something fresh to excite me, and I would say I found that with ease on the new holiday seasonal album, The Christmas Piano by the chart topping and award winning pianist Holly Jones.

The beginning to her collection was one of the most ambient and delightfully thought out compositions I have heard during this season for quite some time, as she brought me a moment of reverie within the realms of I Wonder As I Wander, this is one of those tracks you could play at any time of the year, and still swoon with delight at its vibe.

O Come All Ye Faithful, a true Christmas classic to many, and Jones delivers a fresh tempo, one that flows but still retaining that sense of ambience and mystery within its compositional structure.

When we arrive at probably the most played, performed and well known Christmas song ever in Silent Night, I was very eager to see the outcome, I was therefore extremely pleased to see that even this classic was held with a tenderness in the dimensions of a peace filled pathway of a musical narrative, one that expressed so much through the gentle performance of Holly Jones.

I had just written a piece about an acoustic guitar version of this composition a few moments ago in Still, Still, Still. Here Jones has created a clever arrangement, one that retains its sense of calm ambience, but adds an uplifting energy into the proceedings.

We now slide down the icy embankment of the second half of the album and into the loving arms of a really old song entitled What Child Is This (Green Sleeves). Jones’s performance here was sublime in creating a whole new mood, one could float with this with ease, or should I say skate with joy, what a beautiful version indeed, and I think I can also award her a medal for the best arrangement of this favourite this winter.

Lo, How A Rose E'er Blooming takes us into the deep snowfalls of the release and here Jones really excels, her presentation is so pristine and soothing it is a real pleasure to listen to it, there is a tranquillity of style here that is not just ambient, but also incredibly magical in the musical space it unfurls.

Our penultimate offering is also an incredibly well loved Christmas classic in Away In A Manger, while the theme within its structure is an almost dance like sway, Jones with her beautifully created nuance’s, not only holds dear to tradition, she actually mixes a hint of serenity into the weave as well, a truly crafted and clever performance here indeed.

We now arrive at the last doorway on this eight piece album, and Jones finishes with a very well-remembered composition entitled O Holy Night, again what is an uplifting song, is given a calming energy to its construction, but the elevation of happiness and excitement is still there, deep within the very classy musical narrative.

The Christmas Piano by Holly Jones is what every household the world over should have playing during their Christmas dinners, she brings such a soothing feel to the proceedings on each and every track, and the calmness of performance here is simply, sublimely beautiful, enough to make the event go with a warm and kindly energy. The Christmas Piano may have familiar tracks you have already heard, but this offering by Jones will bring a whole new dynamic into your musical lives, one thoroughly recommended by me.

Posted by Steve Sheppard at 6:32 AM