Speak to the Sky By James Marienthal 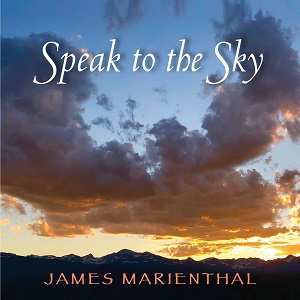 Speak to the Sky

James is a new artist to me, but after taking this journey of flute based magic; it certainly will not be the last. James Marienthal and Speak to The Sky has to be one of the most beautiful albums of its style I have listened to for a very long time and what’s more it has a very memorable energy about its construction too.

This is an eight track release; one that begins with a truly spiritual opus with First Breath and then takes us into an equally haunting reverie entitled Wondering Who, an offering that has such a depth of composition and class, and contains vocalisations from the talented Arwen Ek, that gives the arrangement a sensationally soothing mix.

The title track can be found next, Speak to the Sky is a wonderfully illuminating piece, again a song with an utterly transcendent resonance and through its hovering intent one could easily use this offering for meditational or journeying purposes, as it creates graphic nature based images whilst one is listening to its charming manifestation.

The crisp quality of Marienthal’s flute is something quite special to enjoy, its pristine clarity can be heard on pieces like Escondida, an offering that once again sees vocalisations from Arwen Ek, and then the quite breath taking Navajo Twilight. Whilst listening to this deeply empowering and moving opus, we can almost feel the eyes of the ancestors watching over us, while the moon chases the sun from the sky.

On Returning Home we welcome the guitar of Tom Wasinger, who partners Marienthal on flute, in what has to be said is a beautifully performed symbiotic piece, and then on the penultimate offering entitled Silence Seen the artist switches to the first instrument he learned to perform with, the piano, while we then conclude the album with the outstanding creation entitled A Terraplace of Time. From an ambient perspective this is genius, Marienthal has brought into reality simply the best way to leave the project, and what’s more, leave the listener wanting more.

I must say this was a musical journey that I thoroughly enjoyed and wish to do again many times over, each of the eight tracks contained compositions of great style, thought and intelligence, and were an absolute pleasure to give one’s mind to, which makes it very easy to state that Speak to the Sky by James Marienthal, is an album that I am more than happy to give a huge thumbs up to.

Posted by Steve Sheppard at 7:56 AM