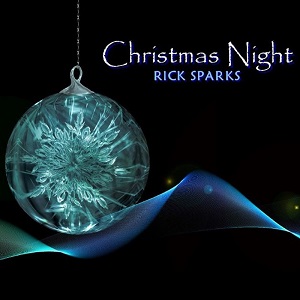 There is something quite magical about the performance style of Rick Sparks, his compositions literally sparkle like the late winter sun across a lake of plenty, and here the artist has once more created something breathtakingly beautiful for us to enjoy.

Christmas Night is the proud title track that opens up this sojourn for us, with a wonderland of beauty and the sparkling refrains and textures, ones that are the musical equivalent of watching light snow flakes drop from the sky late, late, on Christmas Eve.

Christ Is Born is the ethereal follow up piece, the softness of the pads and keyboards manifest something that is as smooth, yet as deep as the darkest night sky in its passion, whilst The First Noel flows like a never ending spring on a mountain side; the flute sounds are truly special at manifesting a pristine quality to the proceedings.

Hark the Herald Angels Sing is a piece that is known by many throughout the years, but this harmonic and angelic rendition is utterly transcendent in its textures and consistencies.

I have always felt that there is something quite grand about this piece, Sparks has taken that and raised the bar even further, and one can then add the brilliance of the piano line on In the Bleak Midwinter, a song that raises the memories and perhaps even a tear in the eye, and all done so very respectfully by the artist.

As we slide down the snow tipped peaks and into the second half of the album, we come across one of the stars off the release in the glistening and shimmering arrangement of What Child Is This, if ever Sparks could release a piece as a soundtrack then this is it, this is without doubt a wonderful performance.

Rick Sparks is indeed a painter of tone, one who creates great masterpieces through the medium of sound, and as an example, you will find all of that and more in these next few pieces. Infant Holy, Infant Lowly, the iridescent offering is a classy moment of keyboards that are so redolent of this time of year, and its majesty if flawlessly followed by the beauty of Once In Royal David's City, one has to mention the ethereal and angelic styled vocalisations here, this is enough to give you the chills as listening to it will flood you with so many loving memories of Christmas.

The penultimate offering is probably one of the most well-known arrangements of all time in Silent Night, I keep hearing new versions of this and others, but Sparks has hit the proverbial nail on the head with this one, and the symbiotic flute with the symphonic string sections creates a colourful musical narrative that is truly heart felt.

Nativity ends our Christmas journey and is also probably the most ambient piece off the release, I personally found something quite moving here, much in the same way as when you get that emotional buzz from a really good soundtrack, the choral energies are strong here also, which makes this piece simply the perfect conclusion to the album, even the string sections hit my emotive body and reminded me at times of Vaughn Williams.

Christmas Night by Rick Sparks is a masterpiece of beauty; layered textures of tone and sound that could have easily been created by the cosmos itself. Sparks has birthed into being one of the most iridescent collections of classic holiday seasonal music you will have ever heard, he has stamped his musical signature on it, and as such offered us the perfect restful and serene seasonal assortment you ever likely to find.

Posted by Steve Sheppard at 8:10 AM