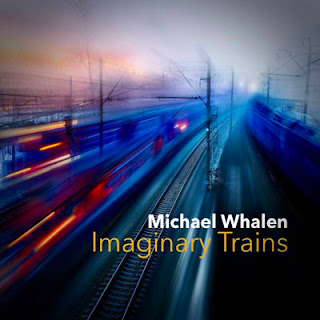 My journey through electronic music has so far taken some 50+ years, and I have been on this Imaginary Train ride through one of the most expressive mediums of music via varied genres, a multitude are artists and albums have come and gone, from ELP, to the amazing Rick Wakeman, from Isao Tomita to Vangelis, and more recently from Jon Serrie to Kevin Kendle, there are too many to mention, but from all of the above, I found influences of within this quite breath taking new release entitled Imaginary Trains by Michael Whalen.

There can be no better place to start than the opening track, one of the finest in my opinion that Whalen has produced; for me it also became personal, pulling forward memories of a very painful train journey out of London many years back, that day in ‘99 Eno helped me home, within this quite emotional opus, elements of Kendle’s crescendo brilliance, aligns with a Berlin styled arrangement that hugs warmly a Vangelis moment or two, and for me makes Imaginary Trains, one of the most sublime starting pieces from Whalen ever.

Nothing like having a Grammy winner on board with your project, we have just got off the back of one with the sensation known as Ricky Kej, and here he is on track 3 entitled Across the World to Be With You, the production on this piece is phenomenal, and if you also add the classy and creative flute of Ravichandra Kulur into the mix, you have a composition that could with ease fit pretty much any movie soundtrack, simply put, it is that good.

Imaginary Trains by Michael Whalen is an album that bears his soul electronically, that opens his heart for us, so that we may enjoy the process and the melodic genius that lives quite happily inside. It is an 11 track collection of crafted musical magic that must be respected, examples of which can be found in pieces like The Wayward Sun, a mournful repose into a soundtrack melody, the light but fascinating The Ribbon of Time, or perhaps the 80’s influenced Dream Together, a ballad to raise an open lighter and sway too.

There are also 4 added specials within the album, remixed versions of the track Across The World, one happened to include one of my favourite rock drummers in Simon Phillips, who I once watched pound the skins of The Michael Schenker Group back in the day, all of these remixes were perfection and wonderful additions to an already masterful album.

Imaginary Trains by Michael Whalen is without doubt the best work of the artist so far, he has embraced all that he loves, and handed it to us on a silver platter, this is one of those albums that you are going to adore, for like the title suggests, you will go on an imaginary train ride through all you know musically, and Whalen’s wondrous collection of sublime arrangements, will be the perfect accompaniment to take along the way. This is not just a good album; this is the finest cut of electronic music I have had the delight to have sampled so far this year, a guaranteed winner without a shadow of a doubt.

Posted by Steve Sheppard at 1:42 AM