Born Out Of Chaos By Vicki Logan 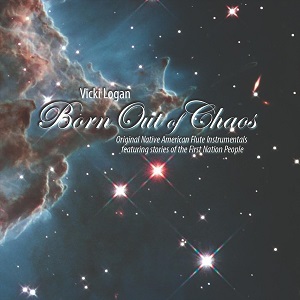 Born Out Of Chaos
By
Vicki Logan
Written by
Steve Sheppard

It’s been some four years since her last album, (Sound Paintings) but flautist and composer Vicki Logan is back with a breath taking new offering entitled Born Out Of Chaos, interestingly enough that feels like the title header for my existence on this planet this time around, but what has been born from chaos, can be enjoyed in balance and peace, and this brand new release is a veritable voyage of plenty.

The album is best listened to as a whole suite, but for you today, we will take one foot at a time through the landscapes of musical brilliance created by Logan. We start with the Native chants that ushers us into the realm of track one entitled “Gathering Of The Mystics”, a piece hovering with anticipation, power and a magical energy that almost crackles as the piece progresses into the next arrangement called, “Summoning The Storyteller”, percussive genius can be found here that lays the foundations for the moment, listen carefully to the flute in the background as it approaches us.

The story and sojourn through time begins as the first tale is told, that which is, “In The Beginning There Was Darkness”. The synths here create a wonderful Native American vibe and partnered with the percussion deliver something quite empowering and confident; there is a blissful energy about this composition that creates a tingle up the spine and up and down the arms, in one of the best tracks off the album.

By no strange coincidence it happens that I am working currently with the wolf in my shamanic meditations, the great teacher and protector, so it is with glee that I listen to this next offering entitled “Spirit Wolf”. Logan’s mix here is amazing and in parts reminds me of UK flautist Niall. The glory of this offering is wonderfully empowering, and with ease one could imagine a white spirit wolf with glowing yellow eyes, making his way through a snow lined forest.

As the wind disappears and the mood settles down around our camp fire, an elder reaches for the talking stick, he closes his eyes for a moment, and then begins his tale about “The Creation of Man (Miwok Legend)”. We can now listen to this tale be told with a mystical flute playing in the background, as the night falls we can hear the crackling of the fire as we take in the words with care and respect.

It is time after our story of the Miwok legend to ponder a little, we can do that in nature, the backdrop for this mental perambulation about life can be done by listening to this next short form composition entitled, “Thinking”.

The creaking of the wind through the trees sounds like the spirits of nature are talking among themselves, and of course they are, so we now return to the fire to listen once more to our story teller, his words of wisdom this time are from an ancient tale indeed, “The Creator Visits (Micmac Legend)”.

This splendid narration of the legend has left us with plenty to think about and to raise the energy and lift the power, so it is now time to enjoy the most rhythmic arrangement off the album entitled “Rising to the Challenge”. Beautifully played by the artist, this moment of flute and percussive beat is performed with such colour and fluency by Logan.

The roll of the drums instruct us that another teacher is about to give us his words of wisdom through “Legend of the Flute, Part 1 (Brule Sioux Legend)”.  Elk medicine is indeed powerful, indeed one of the most powerful, and is a symbol for stamina, endurance and patience. The flute of Logan performs a mournful repose on this one, a track packed full of dream like refrains, which leads us perfectly into one of the most important legends of the music world, the creation of the flute, and the backdrop for this is the wonderfully played “Woodpecker Creates Then Plays The Flute”.

This fascinating tale allows us to then listen further on “Legend Of The Flute, Part 2 (Brule Sioux Legend)”. Thus the story of the flute has begun and this spirit like performance by Logan is utterly transfixing in its content and performance, and ever since the visitation of the Woodpecker in the dreams of a young man’s passion.

This voyage of story, tone, tale and beloved instrumentation has been a blissful journey to have taken, and amazingly so we are now at the penultimate offering off the album, this gift is called “The Secret Place In My Dreams”. Logan has created a wonderfully ambient sanctuary within this composition that simply delights the soul, the lightness of both flute and guitar create a wonderfully colourful and peaceful dimension to visit.

So we have come to the end of our musical meet, and it is time to close the circle, we can do so by enjoying this last offering from the artist called “Celebration Of The Warriors (United We Stand)”. Logan’s deep resonating flute is indeed a call to all warriors, those of strength, abundance, power, healing, harmony, clarity and light, all that we do is in a circle and it is within this circle that we must stand united. Logan ends this utterly hypnotic album in the best way possible, with a stunning performance that you simply never want to end and one that will be running around in your head for ages to come.

Born Out Of Chaos is a marvellous collection of musical tales that are brilliantly performed by an artist that is truly aligned with her musical muse, the research done and respect paid the to the Indigenous peoples of the many nations is glowing and heartfelt. Vicki Logan has taken her time and produced one of the most in-depth and fascinating albums of the decade with this release, and one that I truly believe will be a sure fire winner with her fans and the public in general, this is musical story telling at its very best.
Posted by Steve Sheppard at 5:48 AM