A Classical Meditation By Gary Schmidt 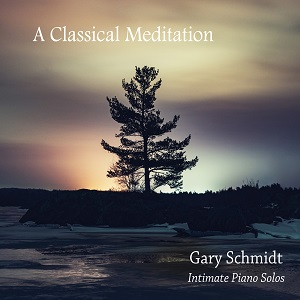 A Classical Meditation
By
Gary Schmidt
Written by
Steve Sheppard

My passion for classical music has been a slow burning desire ever since I was introduced to Holts Planet Suite by my father in my mid-teens, quite an accomplishment you may say, garnishing interest from a teenage boy with regard to classical music, but over the years that passion has grown and now my appreciation of the genre has expanded experientially. Now that love of good music has drawn me closer to an artist who ‘s work I have been more than impressed with for a few years now in one Gary Schmidt, and it is a journey through the classical piano realms, with a meditative view point we must now travel.

A Classical Meditation by Gary Schmidt is the artists follow up album after the huge successes of his previous release in 2018, Even For a Moment, here Schmidt takes his more contemplative side and mixes it with his classical roots to bring us a truly masterful release to enjoy, perhaps on those moments when we wish to just relax in the candle light, or to simply watch the clouds pass on a summers day.

Schmidt has produced something truly charming here with this album that will certainly fit a mood-setting scene with ease, like his version of Adagio From Concerto in Dm, a soothing narrative and performance can be found here. With the mood set and the lights low, enjoy Schmidt’s performance on Etude No2, the touch and tranquil energy that reverberates from the piano on this piece is blissfully special.

Schmidt is a truly accomplished classical pianist, but this album allows him latitude to express his new age skills in the mix of a classical setting, listen to pieces like Claire De Lune, originally penned by the maestro Debussy, Schmidt not only does the composition proud, he literally excels and draws a wonderfully artistic narrative, one that further enhances the inspirational poem of Paul Verlaine to different musical galaxy entirely.

The very nature of this album is the tenderness and subtly of tone it is performed in, Gary Schmidt expresses this further with the piece Pieces Froides - Danses de Travers No1, we will visit the work of Satie again later on within this charming album.

Tracks flow with such an abundance within this release and I am sure that the evening will pass by with such joy by listening to arrangements like Nocturne in Ab, it was so nice to once more bathe within the waters of Chopin once again. They seem to cascade around us with offerings like the quite beautiful Fur Alina, a new composition, but one that would grace an ambient show with ease, and then on and into the regal energies of Piano Concerto No2, a work of genius can be found here, and that was something that I believe that was levied at Rachmaninoff once he had created the original work back in the early part of the 20th century as well.

Gary Schmidt is such an accomplished performer and pianist, he has a style that is technically gifted, but also plays with such warmth as well, a listen to pieces like the unforgettable Moonlight Sonata (First Movement), will certainly emphasize that point entirely, and a piece I have loved ever since I can remember, or this next composition Canon in D, another absolute favourite of mine, I now have a few versions to choose from, but this piece originally by Johann Pachelbel is a fine example of Schmidt’s warmth of performance, much like the next offering Nocturne in C#m, I am so happy to see this included on the album, and especially so as it gifts us the ever eager listener an example of Schmidt’s technical skill set, a vast and precise one at that.

I did say a return to the world of Eric Satie would occur and we are now at that juncture, Pieces Froides - Danses de Travers No2 is a crafted performance that is so incredibly listenable, and followed up with something that may be familiar to many classical followers, a glowing version of Ravels Concerto in G (2nd Movement), a concerto of utter fluency indeed, and Schmidt’s performance is simply transfixing.

This album is packed with such meditative moments of musical magic, with that in mind and in the deeper waters of the release we can find Orfeu et Eurydice - Melodie. Christoph Willibald Glucks work may not be known to many, indeed it was my first introduction to his artistic endeavours, but Schmidt’s performance here is not only picturesque, but classically brilliant with every note played.

The penultimate offering of the album is a splendid moment within the realm of grandmaster Beethoven’s court, Schmidt tackles Symphony No7 with almost laser precision, and delivers us a perfect rendition, one finely balanced and with a sublime build and progression within the musical narrative of the arrangement.

I mentioned Holst to begin with and the second piece of music my father would give to me would be this quite emotional work, New World Symphony (Largo). This has to be one of the most romantic and expressive pieces created by Dvorak, and a master stroke of utter genius by Schmidt to end the album with it, a superb performance it has to be said can be found here too.

A Classical Meditation by Gary Schmidt is a truly wonderful hour plus of quality crafted performances by the artist, ones that all have a meditative quality to them, but all also have that magical sparkle, gifted to them by an utterly professional performance by Schmidt himself. Gary Schmidt has with this brand new offering created an album of classical greats, and made the music completely accessible to all, regardless of whether you were already a fan of this style of music or not, Schmidt has taken it to a new level with this release, and the blissful performances you will find on this recording, will be a sumptuous meal for the musical soul.
Posted by Steve Sheppard at 3:50 AM