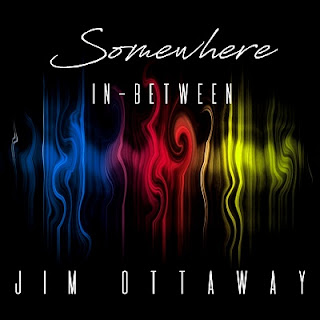 Jim Ottaway is back with a sparkling new album that will raise his profile in the electronic genre tenfold; this work of crafted brilliance is called Somewhere In-Between and is a release that portrays an interesting dimension between time, space and realities, one this is created by an artistic hand that cares so deeply for his work.

Our journey starts with the open and vast realms of the piece Dawn Of Time, this is a truly smart beginning and one that reminds me of the UK’s Geigertek at times with its slow onward build and progression, one that eventually morphs into an undeniably master work of EM.

The following musical narrative is a horse of a completely different colour; there is a lightness of touch within A Dream Within Reach which is so very appealing, in fact after listening to this specific track a few times I found myself constantly whistling the melody over and over, always a good sign for a musician when a song takes home in your head and refuses to leave!

This next one gave me so much pleasure, the hovering intensity and then the Vangelis inspired mood brought One True Vision to my door, and what a sublime track this opus is as well. This safe passage of electronic awareness literally takes the listener on a constant forward movement into somewhere in between perhaps?

The John Carpenter styled opening to this next track was utterly brilliant and Chosen Place would soon become one of my favourites off the album because of it. The smooth and tranquil synths here create a true juxtaposition of sound, something really rare to achieve, let alone to attempt, a very clever offering indeed.

Fire Of Truth has elements of various electronic musical styles within its construction, from Jarre, to Glenn Main to David Wright perhaps. Here Ottaway manifests another airy offering, one that takes a flight path all of its own in an ever elevating energy of brightness and light.

As we reach the second half of the album we come across a fascinating composition called Sacred Ground, in its early stages this tentative track seems to be hiding in the shadows, but then slowly grows in a way that a summer mist burns off on an early July morning, and once the edges of care are dropped, the true essence of this piece burns through to explore a wonderful fluency, and a lush melodic tapestry of tone.

There can be no doubt that Jim Ottaway is one of the finest electronic musicians of his time, and on this next track entitled Carried In My Heart he could well have had a huge hit single with a composition that is easily the most commercial on the album, if the artist had decided to have gone that route of course, however in my view, this piece is to Ottaway, what Oxygene was to Jean-Michel Jarre, a wonderful hook, a sublime melody, and a mood and performance that captures a pure sense of absolute love in the moment.

Sometimes I wonder, sometimes I fear that there is little care in our Lost World, this powerful offering seems to state something similar, and perhaps the key word that is the strongest on the planet today, is a total and unrelenting fear of just about everything! The dark realms of this magnificent piece by Ottaway perhaps explores that aforementioned narrative, and done in a way that reminded me of the old school values of musicians like Michael Shipway.

The vibrating energies that begin this next splendid composition gave me a slice of self-assurance, as I have just used this effect on a new track of mine for my new album, as of yet released, here on Winds Of Promise, the artist builds, and lays brick by brick, one of the most wonderful creations of his release, on a track that truly does what it says on the can.

So here is that illustrious moment, the unveiling of the title track, the main canvas that portrays the entire album, and the piece we reveal is of course Somewhere In-Between. Gentle and progressive keyboards lay a path that is straight and narrow, but true; a fine example can be found here on how to manifest a title track, which speaks volumes for each and every other composition within this collection of wondrous electronic stories.

We have arrived at our last port of call and the artist has one more musical gift to bestow upon us before we disembark from his inner dimensional starship of enlightenment, it is called Shores Of Eternity, apart from being a sublime title, this explorative cornucopia of ambient electronic delights is without doubt the perfect way to conclude the album, a spectacular offering indeed and one that at times reminded me of the late but great Vangelis with his masterpiece, Albedo 0.39.

Somewhere In-Between by Jim Ottaway in my view is the artist’s best work thus far, yes it’s an easy thing for a writer to say, and you may have read similar summaries many times before, but I am far from being disingenuous. On this album I truly believe that Ottaway has elevated his standing within the electronic music community.  Somewhere In-Between by Jim Ottaway has to be a total must for fans of this genre, or seekers of music that search for sonic sanctuaries created with honesty, artistic craft, and sublime intelligence.

Posted by Steve Sheppard at 3:21 AM