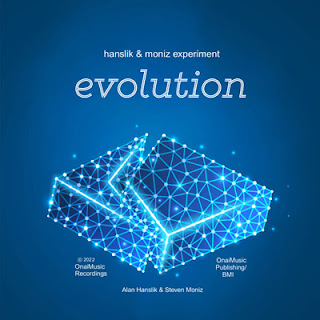 It has been a fascinating journey for me over the last few years watching the growth of these two musicians, Alan Hanslik and Steve Moniz team up once again to take us all on a journey through what could be described as experimental electronic music, but now after the release of this latest offering entitled Evolution, perhaps their style can now be seen as some of the most artistic creations of the decade with ease, and the manifestation of a whole new palate of tone and timbre lays before us, inviting us within its halls of plenty.

The title track Evolution starts our voyage and it is from this base of brilliance we can see just how far this magical pairing have come, the depth to this opening structure is simply amazing, the synths bring a whole world of fluency and calm within an almost oceanic like musical structure, whilst Moniz on guitars brings a level of art into the equation, one that leaves us on the edge of tomorrow, filled full of a great expectancy to come.

As an ambient electronic musician, it’s albums like Evolution that give me so much inspiration and ideas on where to go next, on DNA some very interesting developments can be found, some that had me thinking deeply about the potential growth of this amazing piece I was literally transfixed with. DNA is as powerful as I have heard from the duo, yet there is a dream like plateau of tranquillity that hovers within the back drop of the composition, one that gives the overall piece such crafted balance.

As we reach Tune In, we find a careful progression of sound, and indeed the composition pushed forward redolent of the subject matter of the title. I will say that Hanslik & Moniz Experiment have created something quite clever here, my keen ear observed elements of progressive Jazz and even rock at times, all wrapped up in a bed of electronic wizardry and moulded with an experimental willingness, that whilst exploring realms as of the yet unknown, still kept an overall cogency and consistency.

However one of my favourite’s offerings from the album would be the quite addictive composition Here to There.  At times this wonderfully created sculpture of art reminded me a little of Forrest Smithson in its ambience, and one must applaud both musicians here for allowing their musical muses freedom to roam, whilst allowing the natural state of bliss to continue, in what is one of the most melodic and natural pieces off the album.

Steve Moniz and his guitar create a beginning that is literally tantalising on this next song called Easy Wind, a repeating motif allows Hanslik to bathe the entire composition with a layer of synths and keyboards that allows the piece to coalesce with the tones created, this is once more a masterful arrangement, one that through its structure seemed to re-create itself endlessly.

Our penultimate offering started in an almost Vangelis style and then hovered and floated through a dimension of sight and sound that even the Twilight Zone would have been proud of. Out Worlder is one of those tracks that you will be revisiting many times over; it is also an incredibly addictive composition too, this is such a creative piece that it would make a superb soundtrack to listen to whilst you visit to a modern art gallery near you, it really is music to get lost within.

Our last portrait of musical genius is entitled Escape, the effects and performance on guitars by Moniz here are truly sublime, and adding the synths and keyboards of Hanslik they go on to manifest a track that almost dances with itself. There is also a crafted sense of anticipation and intensity here that is unstoppable as well.

Evolution by Hanslik & Moniz Experiment is with ease the duos best work so far, here is a work that should finally establish them both as outstanding artists within their own field. The combination of guitar and electronics on this release almost gels to a point that they literally become the palate, the paint and the canvas. Hanslik & Moniz Experiment should be proud of their creation, that they have manifested an album that is totally accessible to all with an open mind willing enough to dive deep into this lagoon of artistic brilliance.

Posted by Steve Sheppard at 6:24 AM