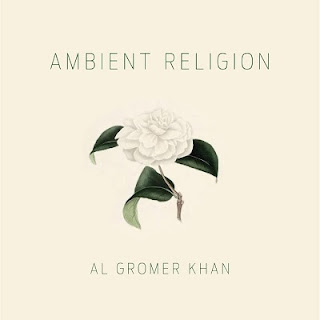 For me, it is always a pleasure when I hear of a new Al Gromer Khan release, this means another huge slice of ambience is about to embed itself into my life, and that can never be a bad thing, in this instance Al Gromer Khan has brought to us, a wonderful vast realm of art now known to us all as Ambient Religion.

For me, ambient music is a journey to a place, a structure, something exterior from my world, and the opportunity to sit in the present and observe the now and to feel the flow of the energy around me; here the artist has manifested nine ambient constructs, and each of these pictures are a unique art form each to their own.

The opening piece is thoroughly Al Gromer Khan territory and called Esprit D’escalier, music for the afterthought perhaps, the artist’s trusty sitar wends its way smoothly through this inner dimension of tranquillity, and perhaps giving a moment of  pause to each and every listener in the most ambient of ways.

Al Gromer Khan has created many structures of ambience, many temples of meditative peace, and on Lichtblau we have another such example of mastery, the softness of the synths and delicacy of the arrangement are indeed a whole new world to enjoy, each and every steady footfall within this track alone will find an all-purpose sanctuary for any willing and open minded listener.

For me one of the key elements of ambient music is that hovering sense of timelessness, we can find that in the composition Avec Bilaka an arrangement that seems to float on a summer breeze, caught by the wind, and coalescing into a new form with each moment passed; light percussion, soft synth pads and a drift down a road less travelled can be found here.

As we near the middle part of the album, we are gifted a real treat with the piece Console. Al Gromer Khan for me is one of the legends in this style of ambience, and within this track there is an emptiness that is filled by musical expression, there is a gateway to a dimension that is in-between the tick and tock of the normally unrelenting clock.

The tone and timbre of the beloved sitar of the artist greet our arrival at this next piece entitled Morgenstern, the ethereal vocalisations added such a depth to the proceedings, here is a short-form musical narrative that introduces us to a world of ambience that proves not everything that is a concept of the genre, needs to be over 30 minutes long.

Carl-Zeiss-Jena is not a track I expected, but one gratefully received, I had not forgotten the East German football team who made such a name for themselves in the 60’s, a memory palace of a piece, beautiful vocals paint a haunting vibe to the arrangement, in a track that seems to touch the very scrapbook of time tone and days glorious, but passed.

We now move to the deep part of our musical reservoir, one so vast and all-encompassing, and one that would turn out to be my personal favourite pieces off the release, also a very unusual one, in that it contains natural sounds within its construct. Novene is a masterful opus of an almost dark ambience that would have gone down really well in Stephen Kings Dark Tower movie; it is a fluent composition with such a wonderfully layered ambience, and probably one of the finest examples of this style of music I have heard for simply years.

The swirling keyboards create mist filled layers on this next offering, our penultimate composition called A Room for H.G, it also partly reminds me of the sense of anticipation that the UK’s Kevin Kendle once built within his offering Night Blue Horizon, but here Al Gromer Khan manifests twists and turns of creativity with each passing minute, in one of the most artistic pieces off the release.

We now arrive at the concluding track of the album; the energy levels are slightly raised here to bring us, a final parting gift, one called Station Break. The light percussive ethic is added to by the artists blissful sitar, and we are gifted a composition that will draw to an end yet another sublime album by one of the all-time masters of the ambient music genre.

Posted by Steve Sheppard at 8:41 AM