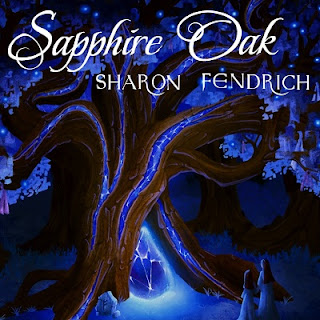 The art in a good musical narrative is being able to take your listener right into your imagination, introduce them to your muse and allow them to roam around your created inner dimension of artistic endeavours, uncluttered by predictabilities and over familiarities, allowing them to simply manifest their own inner magic with your musical manifestations.

The aforementioned statement is exactly what Sharon Fendrich has done with Sapphire Oak, and this new release of colour, imagination and mystery is a wonderful step upwards on the ladder of success for the artist. We can now take our first small step with her as we listen to the opening offering entitled Sea of Oaks, there is an angelic but natural texture to this piece that I adored, somewhat cinematic at times, and also deeply ancient in its tone and timbre, imagine a sea of oaks, stretching for miles upon miles, all dancing to natures tune and being at one within the moment, a beautifully portrayed opus and a slice of neo classical genius to start our journey with.

There is a sense of a timeless proportion within this next piece, the string sections of Leaves of Glory will bring a tear to the eye and an extra breath to the emotional light body. A delightful multi-instrumental moment can be shared here, one that literally floats all around you in a canopy of musical shadows and shapes, a prideful sense of glory can also be found deeper in the weave of this remarkable song, one in which Fendrich performs so admirably on piano.

The Grove at Dodona is our new location, where once oaks reigned supreme and Dodona was once described by no less of a luminary than Homer, as the Oracle of Zeus himself. The orchestration here draws a warming narrative of nature’s rich tapestry, while the atmospheric vocalisations and symphonic gestures are simply breath taking in all proportions.

One of the deepest pools of brilliance on this album came to me when I reached the edge of a track entitled Runic Roots. Here lays an aged piece of deep power and great beauty, its waltz like structures are cleverly compelling, in a way that I haven’t heard since Alan Parsons’s portrayal of Poe’s The Cask of Amontillado.

The next offering is our mid-way point of pleasure and contains something so very rare, the track is entitled Call of the Ruins, here the seeker of wondrous music will find that rare gem in between an arrangement that is so very moving and blissfully graceful, one that has the ethereal hallmarks of a composition that has literally been created by the gods themselves.

The mists of time hover in our location as we fall slowly onto the footpath marked The Oaken Door. The gentleness of this performance was sublime, the fluidity of it even more so, and the string sections added a wonderful Celtic lilt to the composition. I had just been researching the fairy realm shortly before writing this review too, a delicious and delicate composition can indeed be found here, in this grove of mystical musical magic.

Dryad's Rejoice was one of my personal favourite offerings; it has an ebullient flavour all of its own that radiated a sparkling vibration throughout the entire composition. The Dryad is a tree nymph, one who lives in trees and takes the form of a beautiful woman, all of that and more is expressed with great clarity and texture in this crafted composition, the whistle manifested a Celtic mood at times that reminded me of the amazing Nigel Shaw or the charismatic Chris Conway at times, whilst the passion filled performance on piano by Fendrich strikes a home run with this sensational cinematic offering.

As we move onward through our musical woodland we come across a track that has a deep and mysterious persona and entitled Of Badges and Crowns. The solid and empowering performance here by the artist to the backdrop of an almost regal and proud nature, gifts us something of a steadfast and courageous arrangement, one that moves across the battlefields of time with flags waving on high.

The deeper waters of the album have been reached and as we move our oar to the side of our musical boat, we arrive at a delicate and quite breathtakingly beautiful song entitled Under Her Canopy. I must admit I had to listen to this offering several times, and each time I did I found even more to like, the ancestral vocals had me drifting over green hills and valleys, the orchestration brought its own soothing tapestry of tone to the proceedings, and the mood filled piano performance, so craft-fully played by the artist, that her very performance on this piece alone lifted my spirits.

So, we are here, the penultimate offering off the album and of course this is the title track Sapphire Oak. This was a moment of utter beauty, the combination of Fendrich on piano and the careful percussive beat created for me a heartbeat of the earth moment, and then the build, progression and crescendo, manifested what has to be a stand and applaud moment that will never be forgotten, on one of the finest examples of a title track I have heard so far this year.

The last composition carried a lot of responsibility with it, how can one draw to close an album of this class, an album that has such exquisiteness and splendour, a release carved from the very oak itself perhaps. This was done with such skill and expertise, and all of its glory and power emanated from a simply moving and emotive composition to draw our journey to a conclusion called, Carry the Oak.

One has to also add at this final summing up, what a delight it was to listen to the vocals on this album, the tone pitch and inflections were simply idyllic, and right on the money, and what’s more Under Her Canopy was delivered by both Fendrich and her daughter Talia, and sung in Irish, which is also outstanding, all other vocals and for the first time, were sung by the artist Sharon Fendrich herself, in what was a delightfully moving and exciting moment, and an extremely unusual one, but I feel this move is a truly clever one, as it now sets aside Sharon Fendrich as unique, not only an accomplished pianist, but an artist of multi-talents, and a wonderfully articulated vocalist too.

It may have been 3 years since her debut album Red Sky Prairie made her name known to us all in the music business, but Sharon Fendrich has moved on upwards and brought into being without doubt her best work so far, and in the guise of a potential award winning album called Sapphire Oak. Fendrich has surrounded herself with a fine array of class musicians, and thrown herself into the subject matter with an absolute passion, and the result, one of the albums of the year so far with consummate ease.

Posted by Steve Sheppard at 7:50 AM