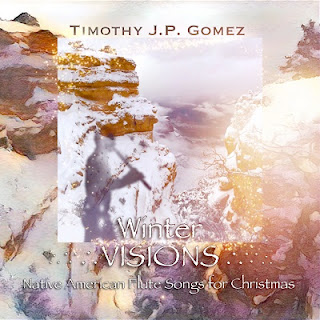 I always love it when an artist decides to create a seasonal album, and then manifests something so original it is utterly brilliant, that is exactly what Timothy J.P. Gomez flautist sublime, has done here with his latest release entitled Winter Visions.

It is indeed rare to hear Christmas albums performed on Native American flute, so it is equally as pleasing listening to such classics like Angels We Have Heard on High, We Three Kings, and The 12 Days of Christmas being presented to us, and in three different ways as well; a little Celtic, Native and Solo ethics can all be found here, and incredibly listenable too.

Gomez has long been on our musical radar, in fact since his The Awakening release back in 2014, and now on Winter Visions he manifests something fresh, fun filled and new for us to enjoy, a prime example of this would be the rhythmic addictiveness of Deck The Halls.

The much loved Coventry Carol is the penultimate offering from this 10 track album, and it is without doubt the most moody and thought provoking piece off the release, and one I must add, is beautifully performed by the artist as well.

Gomez finishes with probably the most well-known Christmas carol of all time in Silent Night, and the depth and almost haunting rendition of this classic ends the album, and brings to conclusion the most original and unique seasonal release I have heard for simply many a year.

Winter Visions by Timothy J.P. Gomez is a whole new approach to the manifestation of a Christmas album you will have heard for some time, if you’re looking for something different to add to you seasonal playlist, then you need to look no further than Winter Visions by Timothy J.P. Gomez, it is redolent of the subject matter, but presented in a most fluent and attractive way, and a fine example of what really good flute music can sound like.

Posted by Steve Sheppard at 1:03 AM