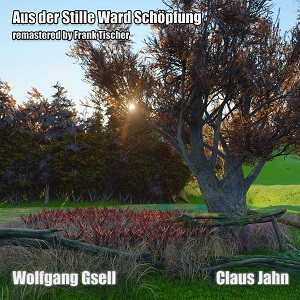 From the depth of the past sometimes comes great beauty, and from its open arms a flow of beautiful energy that can be felt across the world, this is how I would describe this release from the artists Claus Jean and the late but much respected, Wolfgang Gsell.

This remastered version from the 2017 offering, credit to Frank Tischer here, is one of the most transcendent albums I have heard for months. Listen to pieces like the title track itself Aus der Stille Ward Schoepfung (From The Silence Comes Creation) beauty doesn’t just live within this offering, it gives up a sense of hope and total peace, and is one of my personal favourites.

This mixture of guitar and keyboards is examined further through the piece Das Weite Land Jenseits der Tränen (The Vast Land Beyond the Tears). There is also a delightful global fused ethic here to enjoy as well and some very pertinent percussion too.

There is indeed much to like about this release, its narrative is positive and forward thinking, however moments of utter ambience are also explored on compositions like the chilled, Stille Hoffnung unter Eis Bewahrt (Hope Kept Under Ice), or the fluent and choral class of the arrangement, one so laid back on Zeitenwandel (Time Change).

Aus der Stille Ward Schoepfung (From Silence Comes Creation) by Claus Jahn & Wolfgang Gsell has 11 wonderful pieces on offer, and none of them will disappoint the avid listener and seeker of really good music, and as such this writer is destined to slip back from time to time to add a track or three to his personal playlists. Here is an album beautifully presented, produced with such a charming sense of warmth and tenderness and of course with ease, one to recommend to each and every one of you without a shadow of a doubt.

Posted by Steve Sheppard at 1:09 PM