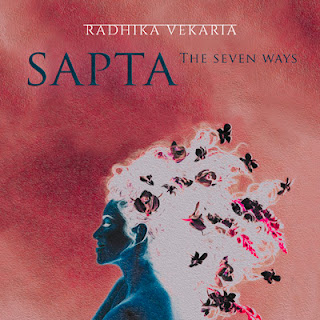 I have heard many albums like this in my past, but SAPTA: The Seven Ways by Radhika Vekaria must be crowned king with ease, this is one of the best produced and best performed albums of sacred spiritual music I have heard for many decades, Vekaraia’s vocals are absolutely pristine and simply perfect, and the multi-instrumental nature of the overall album is utterly sublime.

With classics like Om Namo Bhagavate, this totally liberating composition is a fine example of freedom within the musical narrative, and is quite an empowering and emotional offering as well; Radhika Vekaria’s vocals here are energy lifting moments of sublime bliss.

This is a wonderfully fluent release of seven tracks, and that is as it should be, as SAPTA means seven, and many of the pieces also relate to personal moments of spiritual enlightenment for the artist too. One must also give a tip of the hat to the musicians whom also appear on this release, and on keyboards we find George Landress, on flute its Shashank Acharya and on violin Manas Kumar.

Personal favourites of mine, and maybe you as well eager listener are here, and we can enjoy uplifting pieces like Gayatri Mantra, a piece that I have found that brings great balance and calm whilst listening to its harmonics, the performance by the artists here are nothing less that spectacular in its manifestation, but utterly respectful at its conclusion.

Then we can sample the delights of arrangements like Om Namah Shivaya, probably one of the most well-known pieces off the album, but easily one of the most hypnotic in its intention, I listened to this whole track several times before I had realised I had stopped writing and completely drifted off, this is easily one of the most emotive and empowering tracks off the release, a song to bring peace from stress and allows us to focus, bringing our energy back to the one, this is one of those compositions that you could listen to on repeat for hours and not even notice.

I felt deeply moved by this album, and I personally feel it is one of the best of its kind for over 20 years at least. SAPTA: The Seven Ways by Radhika Vekaria is an open door to a blissful album of sacred and heart felt spiritual mantras, and within the magic of the performance and her intent of openness, Vekaria has made this special music totally accessible to all who have an open heart, an open mind and a willing ear.

Posted by Steve Sheppard at 2:05 AM