NEWT [At Whose Feet is Eternity] By Anantakara 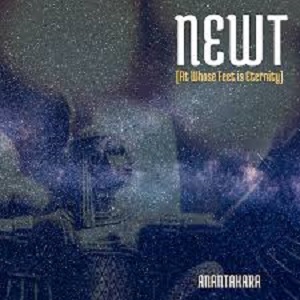 NEWT [At Whose Feet is Eternity]

Anantakara (Phillipe Wauman) the man behind the music, is a specialist in creating lush and fantastical art works of sound and tone, and I have been a follower of his ever since I came across Momentum Lapses in 2018, and have been hooked ever since.

Here on this brand new offering entitled NEWT (At Whose Feet is Eternity) exploring the realms of Nut the Egyptian goddess of the sky and the night, we have a glorious new release that is as far wide and reaching as you the listener will allow, but this splendid ambient soundscape is a truly amazing mood filled journey.

The careful and almost apprehensive opening offering is called She Holds A Thousand Souls, the atmospheric construct here is wonderfully artistic, it builds and creates a vast dimension of tone to wander through, whilst In Whose Hand is the Always, has a totally different energy and style, and is at times almost classical in its progression and manifestation, the repetitive but growing and expanding mantra on keyboards reminded me of the late but still great Darshan Ambient (Michael Allison) in style, the compositions progression is an art form all of its own, in what is an extremely addictive opus.

Lady of the Sycamore our third piece of creative genius is a much darker offering, there is a sense of movement within the weave of this offering I find particularly alluring, and the structure of the overall composition continuously and symbiotically uses its electronic mastery, to bring us one of those tracks that is difficult not to leave on repeat for hours.

The longest of the 5 musical offerings is She Who Bore the Gods at well over nine minutes long, and employs a crafted musical narrative that is inventive as it is artistically sublime. At around 3 minutes in, the energy of the composition picks up and drives us head long into an arrangement that is like a veritable beacon of sound, and then allows us to pull back and float in its utter ambience, this would be my personal favourite off the album and one that reminded me of another late but great musician in Harold Budd.

The last track off this simply superb album is called One Who Hears; the composition has a sense of finality about its construction, which of course makes it the perfect ending track off the release, the keyboards and the performance by the artist here is so moving and deeply creative, and one that I could with ease listen to many times over, and still it would creative an emotive backdrop to my day.

NEWT (At Whose Feet is Eternity) by Anantakara is and was one of the finest electronic ambient works of the year, a year we can’t wait to see the back of in 2020. Here is an album that has five creative and very classy arrangements contained within, and in my view his best work so far.

NEWT (At Whose Feet is Eternity) by Anantakara is an album of stylish electronic compositions, created by an artist who I rate up there with Al Gromer Khan and Darshan Ambient, it is creative colourful and descriptive, and the ambience it manifests is simply compelling.

Posted by Steve Sheppard at 9:45 AM